Over the last year or so I’ve been trying to get a keyboard which I’m totally happy with. I’ve always just used a standard stock keyboard, but thought there must be something better out there. My main use for my keyboard is work – so I really don’t want a gaming keyboard with all the programmable keys and what not. I just wanted a keyboard that was comfortable to type on for extended periods. 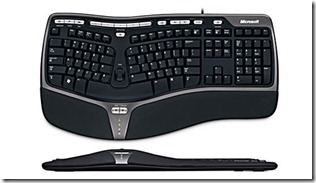 So I started with the Microsoft ergonomic keyboard (yes the one with the split down the middle)! With each keyboard that I have bought I decided to give it at least a few weeks to allow me to get used to it. I knew from the outset that it was going to take time to get used to this one!

The key thing with this keyboard is that you really have to be touch typing to get the most out of it. Reaching across the keyboard is uncomfortable, and its just not made to be used that way. I was ok with this – although I don’t generally touch type, I can do it and just needed a little practice…so I persisted for 3 months. In the end I could not live with it – I actually can’t get used to touch typing!!!

My problem is that I have a paralysed nerve in my right hand which has given me severely degraded muscle – this means that I have very little strength at all in my ring and little finger. It turns out that this is a major issue when trying to touch type! I also found the keys to be quite stiff which compounded the problem. 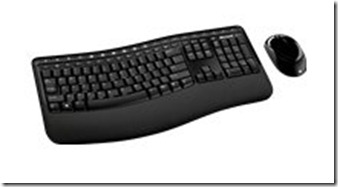 Almost everything about this keyboard I really liked – the curve on the keyboard provided the best typing experience, it isn’t too large, its wireless, its has a nice palm rest on the front, the profile of the keys is just right and the key pressure is near perfect! In general its a great keyboard.

I then started doing some work in Visual Studio – at was at this point I realised that it doesn’t have proper F keys. The F keys on this keyboard are small and inset into the plastic case. This means to press one you have to pretty much press the key into the case. Now for a general user this is not going to be a problem, but as a developer I’m hitting F keys all the time – building, debugging, launching, renaming etc. I found this incredibly frustrating and decided to try and find a keyboard just like it, but with proper F keys. 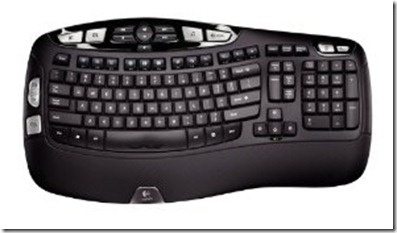 From the pictures this seemed like a really good alternative – it has a similar curve to the Microsoft Comfort keyboard, no split in the keyboard and so importantly (as I discovered) proper F keys.

I only got this keyboard a couple of weeks ago and am again battling through some issues!

I have some minor gripes – it feels larger than the Microsoft Comfort, the build quality isn’t quite as good, the key pressure is not quite right for me etc. But these are the kind of things that I can live with. I do however, have 2 major gripes!

At the minute I cant find a keyboard that I really like – maybe I’m fussy (I definitely am), but its so frustrating getting a couple of keyboards coming so close only to ruin it by changing something tried and tested.

One thing I have learned from this whole exercise is what to look for when I buying a keyboard:

I’ll probably have to go back to the Microsoft Comfort keyboard for now, until I can find something that does exactly what I want!.