I’ve been planning for a little while to refocus my blog, make it look better and make it more useful. To do this I’ve decided to

Initially this blog was written purely for my benefit and as such looked like it does out of the box (so to speak) – but as I’m attracting increasing traffic and people are finding my posts more useful I figure this rework is long overdue.

I thought I’d do a brief series of posts about this, starting with the redesign and re-brand.

I’m primarily a software developer, but I do alright with design and graphics – plus I enjoy doing them! So I thought I’d kick of this mini-project by redesigning my Codenutz logo. My reasons for starting with the logo is that it’ll probably be one of the graphic heavy parts of the project, and will likely drive the look and feel of the entire site.

Designing logos and graphics is a whole process unto itself so to outline my process:

For this project I already had an idea about what I wanted direction I wanted to go in – I wanted the codenutz branding to show influence from my favorite comics (Marvel) and in particular my favorite characters. So the research just involved me raiding my comic book collection! On to sketching

On this occasion I decided to do my sketching on my Windows Surface Pro with Sketchbook Pro as my primary sketching software (now that it supports multi-touch). I sometimes like to sketch on paper and also use a Wacom graphics tablet – but for this project I wanted to give my Surface Pro a go. I was overall pretty happy with the Surface Pro for the sketching, although there were a couple of glitches that I found annoying – but that’s for another post.

In order to move things along more quickly I’ve only produced 2 sketches (see below). Both of these are heavily influenced by comic covers: 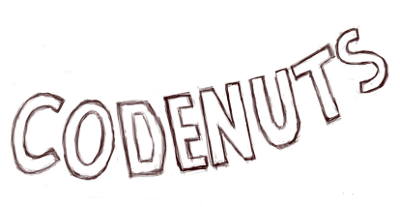 The next stage is to make them into so real vector graphics!

Let me know what you think, what you prefer and if you know what comic they were influenced by! (Nobody will get the first one!)