Decision Buddy is an app I’ve been working towards releasing to the Android Play Store for the last few months. The app is a decision maker tool, used to walk you through a simple decision making process, based on pairwise decision making.

For me, making trivial decisions has always been a bit of a bug bear! I can quite often make serious decisions very quickly and effectively, but making those trivial decisions about where to eat, where to go, what film to see etc, can become a complete blocker. This is compounded when more people get involved in the decision, where I might be reluctant to say exactly what I want to do in case it influences what either people say.

Its always seemed crazy to me that these decisions can be so crippling, but they really can, and its a frustration.

This was the motivation behind Decision Buddy.

I’ll go into more detail about the decision buddy app in a future post, but today I really wanted to introduce our free online decision maker.

We really wanted to make our decision making tool as accessible to as many people as possible, and whilst delivering a free Android app it occurred to us that we could deliver a cut down version of the app for free online. Enter the decision buddy free online decision maker!!! 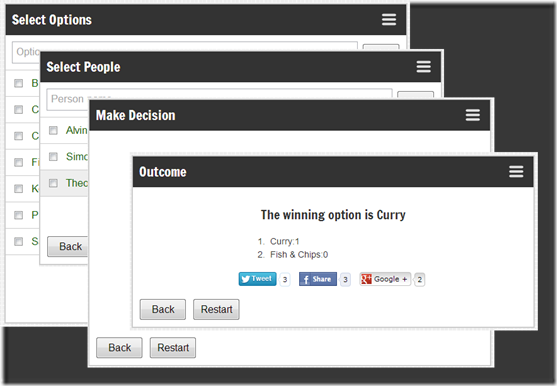 The online decision maker is a simplified version of our upcoming android decision making app – it allows you to specify multiple decision options, multiple people involved in the decision and then it steps you through the decision process. For more detailed info see http://www.decisionbuddyapp.com/News/2013/07/25/free-online-decision-making-tool/.

Next on the agenda is getting our decision making android app into beta – so we’re looking for beta testers!! We’re looking to get the beta app out in August, so if you want to get in and see an early version then sign up on the decision buddy website.

We also love feedback – so if you have any feedback at all drop us an email, tweet us (@decisionbuddy), facebook us or G+ us.