So I’ve been doing a lot of work lately with some of the tools from red-gate (http://www.red-gate.com/) – namely sql source control, sql schema compare and sql data compare. They really are a great set of tools, and I cant recommend them enough.

This set of articles is going to roughly outline some of the steps I’ve gone through in this process, and some of the kinks I’ve had to work out on the way. The base for this project is that I’m using TFS for source control, and have my databases checked in using SQL source control from red-gate. I’m using sql schema and data compare version 10.2 to push the changes around.

Step 1 – Get it working from the command line

SQL compare allows us to do a number of things, but what I’m interested in is deploying directly from our source controlled version of the database. For this I have 2 options:

My preference was to use a scripts folder – when I’m working with continuous deployments, I most often like to use a method that creates a deployment package that consists of all the parts of that specific build for the deployment. For the most part this can work with sql compare, HOWEVER – when deploying from a scripts folder migration scripts WILL NOT be picked up!

This was a deal breaker for me as the migration scripts feature is extremely powerful and is what enables the use of sql compare as an upgrade path. So the only choice was to go direct to source control.

The complex bit is in the OrdersDatabaseArgsFile.xml:

To explain this a little:

One thing you’ll notice about the script above is the use of the scriptfolderxml and migrationfolderxml switches – I have to say here that I know these switches are marked as deprecated, but it was the only way I could get it to work! These switches point at xml files which tell sqlcompare how to locate the source control repository. They look something like this:

I worked out the format of these xml files by first of all creating the equivalent compare project in sql compare: 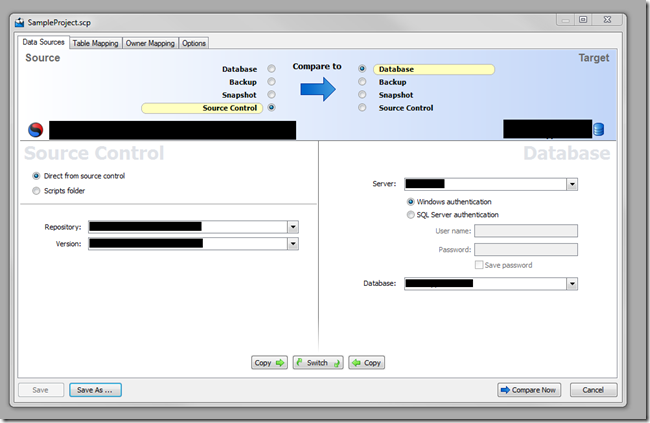 I then saved this file and opened it in my text editor: 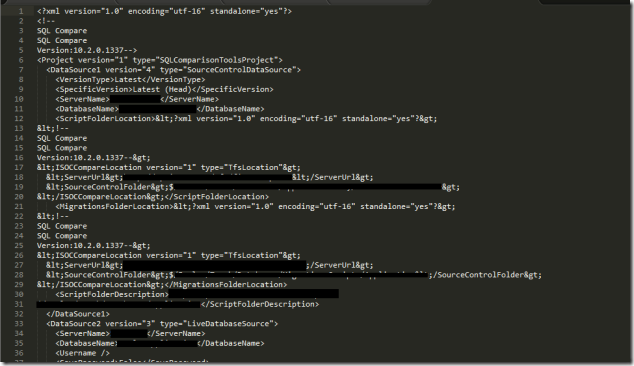 Notice in here that there are a elemtns corresponding to the ScriptFolderLocation and MigrationsFolderLocation – I simply copied the contents of these elements, decoded them at http://coderstoolbox.net/string/ and put them in  corresponding xml files. Running this should get sql compare deploying the latest head version with migration scripts, via the command line.

Please let me know if your need any further explanation, and I should follow this post with more details on how this was added to my TFS build.

Note – One thing I have noticed is that sql compare will only execute the migration scripts if it detects some conflict.